How to record your screen using Python 🐍 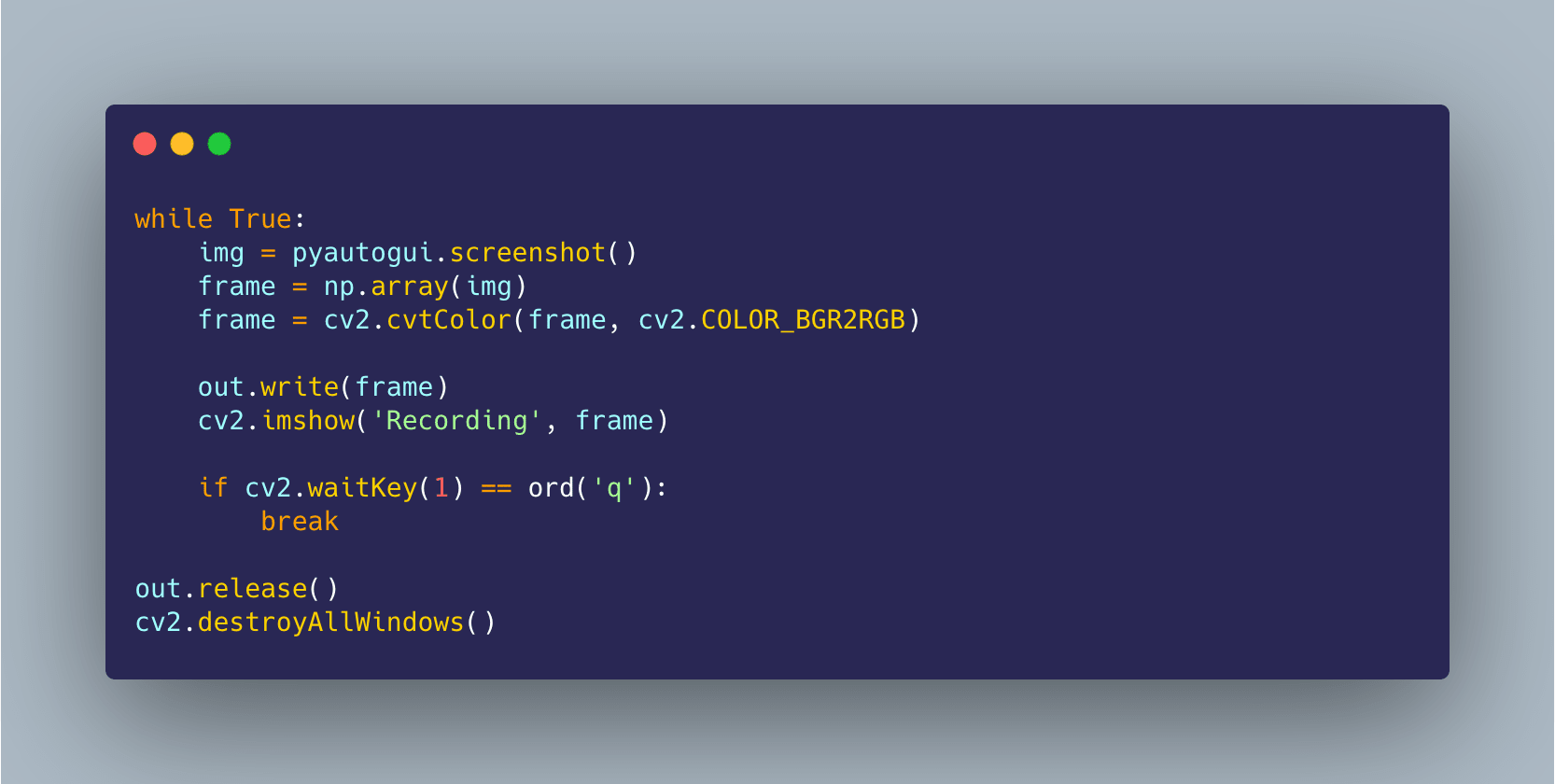 In this article, we are going to take a look at how we can record our screen using Python. Before getting into it, one should first understand what actually a video is. Basically, a video is nothing but a sequence of images (called frames) displayed at a given frequency. So a workaround to make a screen recorder would be to capture each frame of the screen and write it as a video file. To do this python comes with handy libraries. For the screen recording, we will be using OpenCV, PyAutoGUI, and Numpy. Read more about OpenCV in our last article.

OpenCV- An awesome tool for computer vision in python

So let’s get started! Make sure you have all the above mentioned necessary libraries installed. You are all set! The first step is to import all the modules needed. The next step is to specify the video codec using fourCC. It is a 4-byte code used for specifying the video codec. For the sake of simplicity we can pass the FourCC code for AVI video format which is *"XVID". In the next step, we will be creating a videoWriter object. The video writer method of cv2 module needs 4 mandatory arguments. First is the filename, second being the codec, third being the FPS (Frame per second) and the last being the video (or Screen) resolution. For a better screen recording, 60 FPS is a good frame rate. You can experiment around the FPS value to get the optimum results. The next step is to implicitly create a window using namedWindow() method with the WINDOW_NORMAL flag so that the user can resize the window depending upon the need. Now we need to capture a screenshot of each frame of the screen, write it to the video file and display the screen being recorded. Here is the code snippet, Notice that the screenshot captured is in BGR format but in order to write the frame to the video file, we need to convert it into RGB format using cvt.Color() method with COLOR_BGR2RBG flag. The condition if cv2.waitKey(1) == ord('q') waits for the user to press ‘q’ key to quit the recording. Lastly, we have closed the video file and destroyed the recording window by release() and destroyAllWindows() method respectively. PS: Linux users please don’t be happy after hearing “Destroy all Windows”😂 You are all done! It’s time to test the results. Normal-sized window 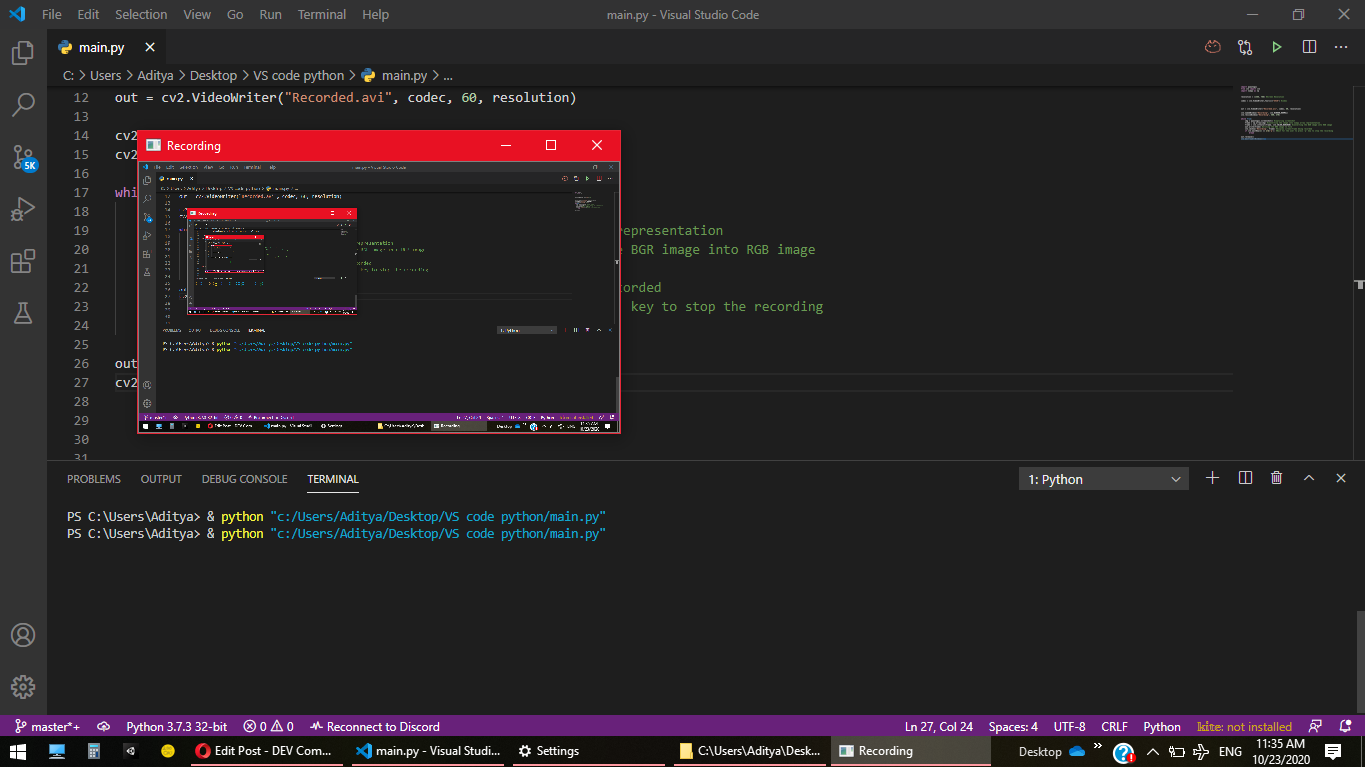 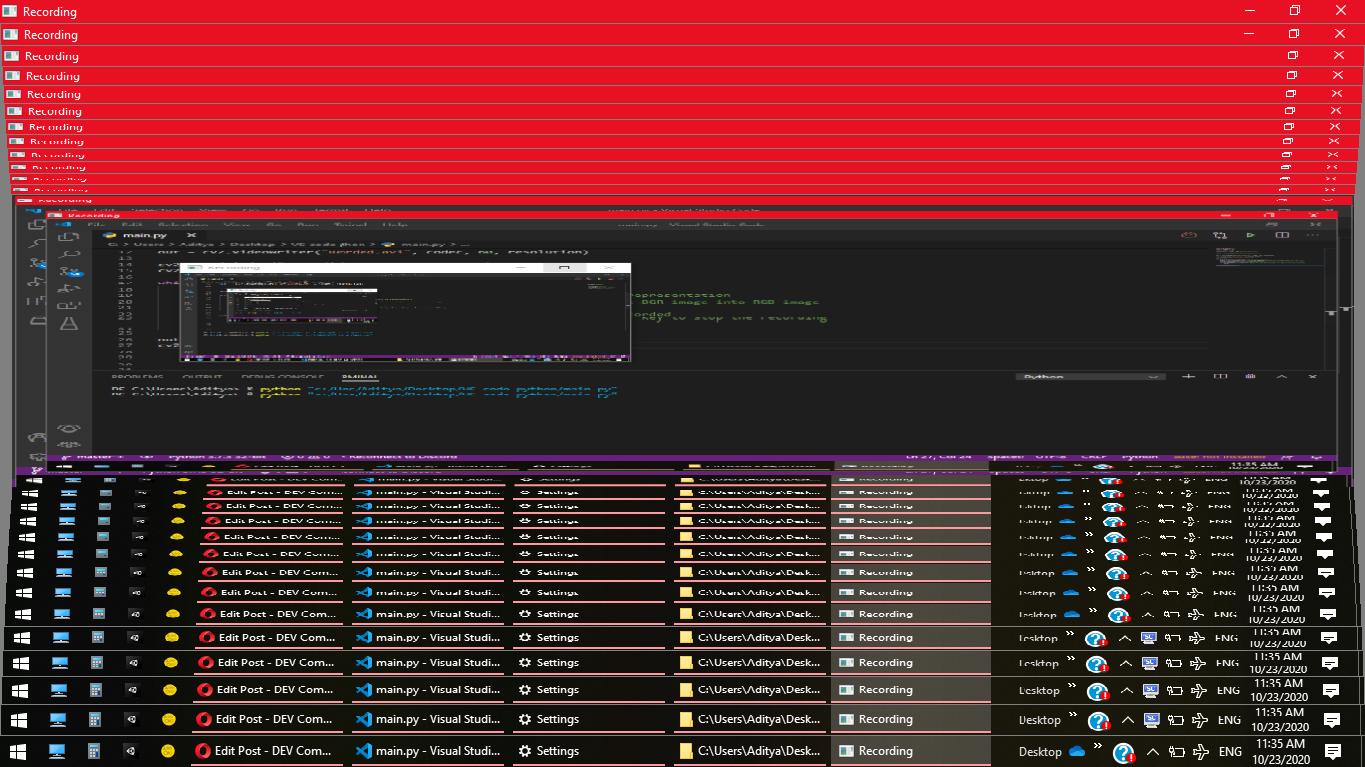